If there’s one thing the Kardashian-Jenner clan knows how to do, it’s let drama unfold on camera. Perhaps never has this talent been more called upon than in the second part of the Keeping Up With the Kardashians special, About Bruce. But while emotions were pinging all over the place among all members of the family (except Rob, who was conspicuously absent), the overall theme was constant: Everyone wants Bruce to be happy… including Bruce.
During the hour-long docu-style show — which was shot before Jenner’s Diane Sawyer interview aired — Bruce took time out to speak with everyone individually to ensure everyone felt at peace with the changes ahead regarding his transition from male to female.
Related: 13 Things We Learned From Bruce Jenner’s Diane Sawyer Interview
Some (like Kim, Kourtney, and Scott) took Bruce’s news in stride, others (like Kris and Khloé), not so much. The youngest of Jenner’s children, Kylie, 17, and Kendall, 19, both handled the situation with a poise it’s often easy to forget they posses — at least, when they want to, that is. Through all the tears, however, were bright spots of joy and humor. We rounded up the best nine moments that show whether you admire Bruce, are upset by Bruce, or are totally confused by Bruce, you’re not alone.
1. Bruce revealed that he does not have an appointment to have gender reassignment surgery.

At the outset of the episode Kim cut right to the chase. Though words seemed to escape her and she was left communicating through awkward hand motions toward Bruce’s nether region, she managed to ask: “So, like you don’t have a surgery to remove that and then that means you’re the woman?”
Bruce replied, “Remove the little thing down there? You can do an awful lot down there. As of right now, no, as of right now, no, [I don’t have an appointment to do that].” However, he did reveal that he had only one appointment left, but it didn’t have anything to do with that. 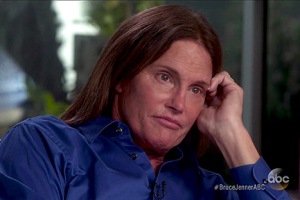 2. Kim tried to understand if Bruce is heterosexual or a lesbian or something else.

With that technicality about “the little thing down there” out of the way, Kim moved on to the question of whom Bruce wants to sleep with moving forward. “I’m totally heterosexual,” he answered with confidence before adding, “As a guy, I was always attracted to women.” This only seemed to befuddle Kim more — not that we blame her.
“But if you were a woman, were you a lesbian?” she asked of the time he spent with her mother when he already felt like a female. “After that last appointment, you consider yourself a women,” Kim restated for confirmation. Bruce seemed to agree, prompting her to ask, “Would you date women?” To that, Bruce basically shrugged and said he didn’t know yet.
3. Scott asked Bruce if he was going to be the butchiest girl ever.

During a heart-to-heart chat, Bruce explained to Scott — who apparently had no idea Bruce was transitioning at all — the source of so much of his angst over the years. “My whole life I haven’t been honest with myself,” Bruce said. “I haven’t been honest with my kids and it’s been this big secret that nobody can talk about.” Scott then decided that Bruce’s internal angst must have been the cause of the friction in their relationship over the years (rather than his excessive partying and issues with drinking).
Scott then turned on the charm and asked the former Olympian, “Are you going to be the butchiest girl ever?” Bruce seemed to laugh this question off, prompting Lord Disick to then have another brilliant realization. “Sometimes I thought it was something about me, but I realized that probably I’m just perfect and it’s everybody else around me that’s got issues.” Typical Scott.
4. Khloé recovered from the initial shock of Bruce’s announcement and made up with her stepdad.

In About Bruce: Part 1, Khloé seemed to take Bruce’s transition harder than the rest. She was particularly upset because she felt Bruce had been lying to all of them. But on Monday night’s episode, Kendall urged her older half-sister to reconsider how she was responding. “You don’t need to be so hard on him,” Kendall said. “I’m sure it’s not easy to spill everything all at once, so maybe withholding information is just sort of a natural thing.” 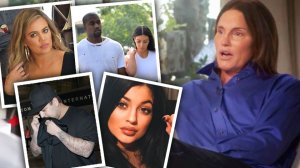 At first, Khloé defended herself. “I’ve never been through something like that before. Yeah, my reaction was aggressive, but I was more mad that he was proceeding with something, but telling us something completely different until we cornered him.” But once Bruce arrived to talk it out, he quickly got her guard down.
“Sometimes because of my love for you and my feelings for you, I don’t want to hurt you and so I apologize for not being as honest as I should be,” Bruce admitted. Khloé accepted his apology and declared, “You’ve been a f—ing incredible father to all of us.” Despite the expletive, it was rather sweet. “I’ve always been Team Bruce,” she added. The clear indication was that she always will be.
5. Kourtney and Scott revealed that they are keeping the news about Bruce from their son, Mason… for now.

Kourtney, Scott, and Khloé reconvened in some sort of backyard paradise to catch up on the latest and during this chat, Kourt revealed that she doesn’t want to discuss Bruce’s transition in front of her 5-year-old son, Mason. “We are waiting to see what Bruce does before we tell Mason. I definitely don’t want him to find out from someone at school or something like that. I want him to find out through us,” she explained to Khloé, who warned her that it’s pretty much impossible to keep Mason shielded from everyone who could spill the news about his grandfather at any moment. Kourtney conceded that Khloé was probably right, but no real resolution was reached.
For his part, Scott seemed on board with Mason knowing — whenever Kourtney thinks it’s appropriate. “Kourtney and I have definitely talked about how we’re going to explain this to Mason,” he shared. “It’s only a positive for my son and my daughter to know all of the things that go on in this world.”

While Bruce seemed to think that Khloé was taking his transition the hardest, from this episode it seemed like Kris was the one feeling really torn apart. “I think I’m just so confused right now,” the matriarch confessed. “I think you shut me out a long time ago. You were angry, which made me angry.” Bruce saw things a bit differently and jumped in saying, “You treated me badly those last four or five years of our marriage. I wasn’t happy.” But Kris wasn’t buying it. “No, you were just very, very angry to the point where we had to separate and then get divorced. You never said this was going to be the end result, ever. So now it makes sense to me and I just think that being honest was something that we all would have appreciated,” she snapped. 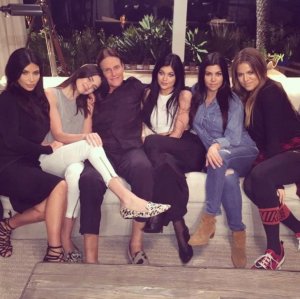 But her tone turned from anger to sadness as Bruce continued to reiterate how much he truly cares for her. “I just miss Bruce and that’s going to take me a minute to mourn that relationship,” Kris cried. “I’ll never really be able to have Bruce and all I have really is my memories. I look at pictures of you and the kids and I feel really sad. I feel like you died, like Bruce died, and it’s really hard for me to wrap my head around that.” (Just as a refresher, this is a woman who encouraged her daughter to pose for Playboy. It takes a lot to break Kris Jenner, but Bruce’s bombshell truly did.)
7. Bruce insisted to Kris he never took hormones while they were married and that he still loves her.
One sore spot Bruce was able to mend with Kris was by clarifying when he began his hormone treatments. “I didn’t take them until after we left, until after we went our separate ways. I wasn’t taking them while we were together. That was all done after we separated. I went to a therapist, started to figure myself out,” he explained. “I did none of that beforehand.” He reiterated, again, that he still loves her and — perhaps a bit surprisingly — she reciprocated.