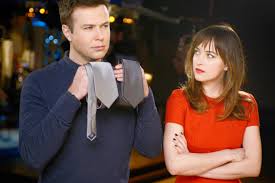 She was funny and seemed ready for the stardom she has recently acquired. In one classic sketch she and Christian Grey (played by Kyle Mooney) met with construction workers redoing their “play room”. The workers assured them that they added 12 new “wiener holes” to the wall. Dakota was a controversial choice to star in FSOG but she showed chops in an appearance in the SOCIAL NETWORK, opposite Justin Timberlake in a sexy Stanford underwear scene. She also showed comedy range in THE FIVE YEAR ENGAGEMENT. She hales from top Hollywood pedigree. Her parents are the uber-famous Melanie Griffith and Don Johnson. Her Grandmother is Tipi Hedren, the beautiful Alfred Hitchcock heroine most known for her starring role in the THE BIRDS. Dakota and her mother had an endearing interview at the Oscars where Griffith stated she didn’t want to see FSOG because of its sultry nature. It’s funny she feels that way as she definitely used her sexiness to bolster her career. She has done many nude scenes (check out her 80’s film BODY DOUBLE) and even did a Playboy pictorial.

Dakota’s parents even made a cameo in her opening monologue for her SNL appearance which was awkward but funny. It was made apparent that Melanie hosted SNL exactly 9 months before Dakota was born which would indicate that she possibly was conceived the night her mother hosted.