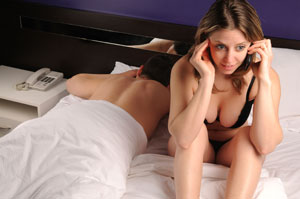 Why women cheat differs from woman to woman. Some do it for love, some for sex, some need a boost in their self-esteem and some are just wired to be unfaithful. I’m of the opinion that it doesn’t matter why women cheat. Once the cheating occurs I’m not one to go looking for excuses for bad behavior. I know from experience though that if your wife has cheated, your first question will more than likely be why? Below are four reasons some women cheat. Keep in mind that the reason behind the cheating is not as important as the cheating itself. Don’t allow yourself to make excuses for bad behavior!

Some women become nothing more than a mother, housekeeper and wife who keeps the family running smoothly. Maybe she is feeling frumpy and unattractive. Her self-esteem is in the gutter…she no longer feels sexy, beautiful or desirable. She is married to a man who takes her and the marriage for granted.Enter into the picture a man who compliments her, shows interest in her emotionally, tells her she is beautiful. A man who looks at her and sees something other than a mother, housekeeper and wife. A woman who is having issues with low self-esteem is a sitting duck for a man like this. She may find herself willing to throw caution to the wind in order to find the validation she needs and is not getting in the marriage.

I know a couple that have no children. They both work hard so they can have the big house, the expensive cars and the prestigious lifestyle they believe will make them happy. Only problem is, they are working so hard to accumulate things that they are neglecting their relationship with each other.There is no romance in their marriage and any emotional attachments are to the “things” they’ve acquired over the years. The wife recently told me she was “lonely in her marriage.” What happens when a woman feels lonely and no emotional attachment to her husband? She goes looking for emotional attachment elsewhere.

There is no better way to get back at a husband who has cheated than to cheat yourself. It is true that “hell hath no fury like a woman scorned.” If you want to bring out the worst in your wife let her doubt your fidelity.

I know a woman who had been a devoted wife and mother. She had spent years putting her family and marriage first. She caught her husband with his young lover and was hell bent on getting revenge. She went to Victoria’s Secret, charged hundreds of dollars in lingerie and then found someone other than her husband to show it all off to. Her husband got the bill! So, if you are out cheating on your wife do so knowing that she may end up playing “tit for tat.” Nothing is more surprising or harder to deal with than finding out your devoted wife has decided that what is “good for the goose, is good for the gander.”

The Wife Who Seeks Excitement:

You have heard of men who are serial cheaters…they cheat for the thrill of it. There are women who are thrill seekers also. They may love their husbands, would never entertain the thought of leaving him but they need a little something extra. It is my opinion that most “thrill seekers” miss the feeling that comes with feeling their spouse can’t keep his hands off her. She wants to be wanted, to feel sexy, as if she turns her husband on every time she walks in the room. When she loses that feeling, she goes looking for it outside the marriage.

If she isn’t getting sex at home, don’t be surprised if she goes looking for it outside the marriage. As men age their testosterone levels drop. When this happens they become less interested in sex or develop sexual dysfunction and are unable to perform. A wife ends up with a husband who would rather watch football or read a good book at bedtime than have sex with his wife.

He would rather do anything other than take the chance of trying and then not being able to perform. He withdraws from his wife instead of discussing his problem and coming up with a solution to the problem.

Then you have men who withhold sex as a form of punishment. Men who don’t communicate their dissatisfaction with something their wife has done but punish her by withdrawing from her sexually.

Whatever the reason is, ignoring the sexual needs of your wife sets you up to one day have to deal with the pain of her cheating. When a woman feels her husband no longer wants her sexually, she feels deprived and uncared for. Feelings that may spur her into going outside the marriage to find what she needs.

Regardless of the reasons women cheat there are no excuses for being unfaithful. I had an email recently from a reader; he stated, “While no one ever twists the arm of a cheater to offend, does it not seem plausible that a spouse who dismisses overt dissatisfaction share some responsibility in paving the way for these things to happen?” My response was “no.” No one is ever responsible for cheating but the cheater. If a wife is having problems with self-esteem, or feeling sexually deprived she has options open to her other than cheating. First, there should be effort put toward solving the marital problems. If that can’t be done there is divorce court. Anyone needing something they can’t find inside the marriage should wait until they are legally free before seeking it outside the marriage.