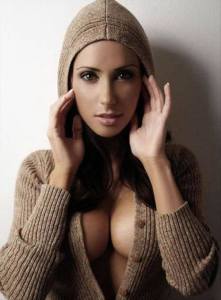 Anthropologist Helen Fisher relates big breasts as honest signs of the ability to ovulate. Of course the first analyses had to do with fertility. Women with large tumescent (i.e. swollen) breasts are fertile. Older women, whose breasts typically sag, are not likely to have a healthy pregnancy. Similarly, as we became bi-pedal primates, we began to visually display our sex organs. Male and female genitals were readily discernible making sexual interaction easier. Individuals with larger penises for example were easily spotted by ovulating females and mated more often, AKA more offspring with big dicks. As for males searching out females to impregnate large noticeable tits were spotted first. SO genetically it made sense.
Desmond Morris a famous ethnologist. Who wrote the book, The Naked Ape, looked at human sexuality zoologically. He hypothesized that women’s red full lips are transferences of a swollen vulva (maybe the reason why the lipstick industry has done so well) and large breast reminders off buttocks.  These genetic reminders are of inherited mating rituals from when we were quadrupeds. This is not a widely excepted theory but don’t tell that to the MAC corporation lipstick division.
One of my favorite books is Sex: A Natural History, by Joann Ellison Rogers. In it she explores our sexual habits and proclivities through the lens of human evolution. One theory that has gained a lot of momentum over the years is that women with large breasts appeared either ovulating or lactating and, consequently, attracted more males. Males may have protected large breasted females to ensure the safety of their offspring … even in utero. Big breasts may have been a deceptive tactic to fool males into providing them extra food and protection. From the male perspective he is providing for an ovulating female that will provide sex and hopefully become pregnant or, better yet, he is providing for the future mother of his offspring. Hey Darwin are you listening? Big tits are multifunctional! Put them in the genetic matrix.